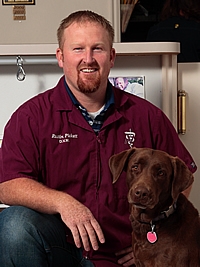 Growing up in Fayette, Utah, Rustin worked at a local dairy farm from the age of 14 to the time he moved away for graduate school. Working around so many animals, from dogs and cats to cattle and racehorses, Rustin saw firsthand the invaluable nature of veterinarians. Even as a youngster, it was evident to him how much compassion and care he could provide, and he was inspired to become a veterinarian!

Dr. Pickett completed his bachelor’s degree in Biology at Southern Utah University. He also received his teaching certificate for biology and chemistry while studying there. After that, he was accepted to the Mississippi State University College of Veterinary Medicine and graduated with his DVM after four years of hard work. Rustin began working at Arcadia Veterinary Clinic in 2010 as an Associate Veterinarian and has loved every minute of it!

Dr. Pickett particularly likes surgery and the hands-on finesse it requires. Reproduction is another area that is very interesting to him as a veterinary professional.

Outside of work, Rustin has many hobbies. He likes building things with his hands, and has built his parents’ kitchen cabinets, a gun cabinet, a cedar chest, a shed, and finished the basement of his house! He also likes gardening and outdoor activities like fishing, hiking, and camping. He’s also an avid hunter and says his some of his fondest moments have occurred while archery hunting with his dad.

Dr. Pickett has been married to his wife Kourtney for almost 11 years. They have three children: Brynnlie, a happy blonde girl who loves anything, Bronson who loves to fight and kick, and Kason who enjoys anything that another sibling is doing. The family has two dogs, Sadie and Bentley, and a cat named Minnie Mouser. 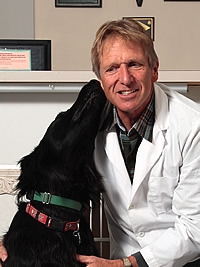 The son of a large-animal veterinarian, Bruce Williams has fond memories of working with his father, assisting in calving or foaling. He loved helping with the miracle of life and wanted to keep doing it—now he can as the Owner and Veterinarian at Arcadia Veterinary Clinic!

Dr. Williams was born in Logan, Utah, and moved to Heber City two years later. He attended Utah State University for his undergraduate studies, then was accepted to veterinary school after three years, graduating from Oregon State University with his DVM. After vet school, Dr. Williams immediately moved back to Heber Valley, the location he loves.

As a veterinarian, Bruce particularly enjoys surgery and internal medicine. He also likes helping in emergency and critical care situations and returning a safe pet to their grateful family.

Dr. Williams has two cats that love to snuggle at night. His dog Jed does numerous tricks, including bowing on command! In his spare time, Bruce enjoys water sports. He started wake boarding at the age of 55, thanks to the prompting of his family. He also has retained his passion for football since he was a kid and now manages a fantasy football league. 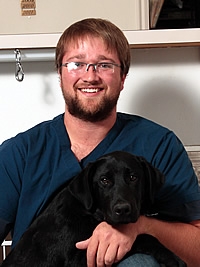 In many ways, Trenton was born into the animal care profession. Both his parents work at Arcadia Veterinary Clinic—his father as Owner and Veterinarian and his mother as Office Manager—and Trenton’s grandfather was a large-animal veterinarian as well. The veterinary profession was clearly Trenton’s past, present, and future—now he serves as the Hospital Administrator at Arcadia Veterinary Clinic!

Trenton grew up in Heber City with his parents and three siblings. He started working at Arcadia when he was a junior in high school. After graduating from Utah State University with a Bachelor’s degree in Animal Science in 2013, Trenton was hired on full-time at his parents’ clinic. He likes the business end of managing the clinic, making sure the people caring for pets are doing so to the standard of professional animal care, and getting to know all of the clients personally.

Trenton recently bought a Labrador puppy named Drake. He’s quiet and timid but opens up completely when he gets to know you! Trenton’s family also has two cats.

Trenton loves to waterski and be out on the lake. During high school, he was passionate about football—his senior year the team took 3rd in state—and music. He plays the Sousaphone and bass guitar, and was even part of the Aggie Marching Band at Utah State University! 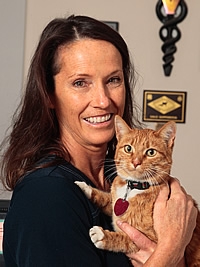 Cathy Williams was surrounded by animals ever since she can remember. She grew up on a dairy and beef farm in Charleston, Utah, and was caring for animals since she was a young girl. She administered vaccines and treated calves when she was extremely young, and it always just seemed like a normal part of life for her—for Cathy, it’s no surprise she got into the professional veterinary field!

Cathy went to Utah State University to obtain her Bachelor’s degree. She spent four years in Washington and Oregon with her husband, who was attending vet school, before moving back to Utah to start her career. She began as a receptionist, then trained to become a technician, and now serves as the Practice Manager at Arcadia Veterinary Clinic, where she’s been since 1983!

Client education is especially important to Cathy. She also enjoys working with neonatal patients that need special care—she says it’s incredibly rewarding when a critical patient recovers and she knows she made a difference.

Cathy has two cats and a dog. Quasi Moto the cat is named for her hunched back. Cali-Co is a beautiful cat who Cathy says has never been dirty a day in her life! The family dog, Jed, is a black retriever who will do any trick for a treat.

Cathy’s two favorite hobbies are football and waterskiing. Her parents encouraged her to waterski and she has being doing it since she was about 10 years old. She says she’s been perfecting her style—including how to slalom on one ski—for 45 years now! 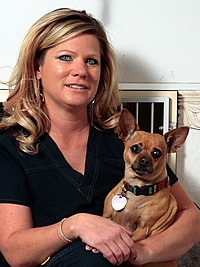 Julia grew up in Minersville, Utah, with her brother and parents. She grew up in the agriculture industry since her father worked at the local feed and supply store. She would help deliver the grain and food products to local farms—she was exposed to the farm animals and the inspiration stories of farmers at a young age, and knew the veterinary profession was for her!

Julia studied Agriculture Science and Agriculture Business at Southern Utah University while simultaneously working at Circle 4 Farms, where she worked for 10 years. Julia and her family moved to Heber City when she was hired as Arcadia Veterinary Clinic’s Client Relations Specialist!

Julia has two children with her husband Ben—Julia’s daughter has done rodeo since she was four years old. Her son is in the 5th grade and is in his second year of horse 4-H. He also likes wrestling.

The family loves rodeo, hunting, fishing, and anything else involving the outdoors. Julia says they work as hard as they play, and wouldn’t have it any other way! 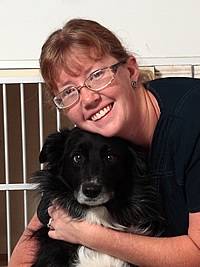 Chasity has lived in Heber City for 27 years. She was involved in 4-H and the Future Farmers of America organization from a young age and enjoyed learning about livestock and showing horses. She also volunteered at the local Lions club during rodeos—the club ended up giving her a scholarship, and she was able to graduate from Penn Foster with her veterinary certification the same year she graduated high school! Now she helps pets daily as a Veterinary Technician at Arcadia Veterinary Clinic.

Chasity enjoys surgeries and interacting closely with clients and their pets. She also loves large-animal ultrasounds. She says the love and affection she gets from caring for animals brings more joy to her life than she thought was possible!

Travis, Chasity’s fiancé, is her rock and loves animals almost as much as she does! Chasity’s father is still her best friend and always is ready to attend a rodeo or horse show. Chasity has a border collie named Boots and three horses: Peanut, Sugar, and Chewy. She also has a Black Angus cow named Barbie who still suckles Chasity’s fingers even though she’s full grown!

Accessibility by WAH
Call Us Text Us